Some information about my research project – “Theoretical concept of global navigation satellite system for Mars”.

Proposed name for the system: FATIMA – Fix And TIme provisioning system for MArs

Why satellite navigation system for Mars?

Precise positioning on Mars is one of the critical aspects of any exploration mission. Current complex planetary exploration systems (orbital and surface) rely on complex navigation and positioning systems, which make these systems complicated, expensive, and their missions dangerous. The project of a global navigation satellite system for Mars can make these and even the future manned missions safer, less expensive, and the whole positioning in real-time more reliable. The proposed GNSS for Mars (system FATIMA) can be used by more systems or users at the same time simultaneously.

The interesting is the answer to the question of the application of a satellite navigation system for the first manned mission to Mars. The private space companies and government space agencies often describe their visions of manned Mars exploration from a very general point of view. But one can imagine that Mars isn’t Moon and it isn’t much near the Earth.

The mission to Mars will last a very long time. The crew will have to spend a lot of time on the surface of Mars. The question is, how will we land on Mars with all the necessary modules (habitats, experiment modules, etc..) if we will not have any reliable satellite positioning service? What will happen if the crew will land just a few kilometers (miles) away from the life support systems and modules which would have landed sometime before? The martian world is very nice. But can you imagine a crew lost somewhere in this world, with no idea where exactly they’ve just landed and where exactly is the nearest life-support system?

Planning a mission to Mars isn’t a Hollywood movie. It is a real thing. Real lives. All the risks have to be minimized to zero. We all can remember the situation of the Apollo 13 astronauts. They were approximately 384 400 km away from Earth. Even the resolution of their technical problems on board of Apollo spacecraft was making a huge headache for many engineers and scientists on Earth. And they were just 384 400 km away. But what if we have a crew of astronauts lost on Mars? Remember, the average distance from Earth to Mars is 225 000 000 km. So they will really need to know where they exactly are in case they will get lost or in case they will land in unexpected distance away from the previously landed equipment and mission modules. 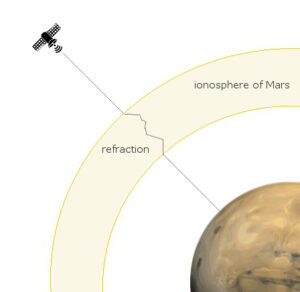 One of the most important parts of the research is the ionosphere of Mars. It causes signal refraction, one of the factors resulting in positioning errors. Image credit: Dr. Jozef Kozar

Do you need some more information about the results of the research? contact me

Next steps of the research

Data used in research are from direct resources located at Mars (probes):

Do you think that you can support or donate my research? (contact)

Presence (and future, if any?)

The initial phase of the research project began during my time at the Technical University of Kosice in Slovakia (2012). When I completed my Ph.D. dissertation (2016, Mars GNSS), I moved to the city of Brno in the Czech Republic and I continued the project independently and under the wings of a private research laboratory called MSL (Mars Systems Laboratory).

At present (June 2022), I am still working on the project as the main research scientist, but mostly on a part-time basis. Maybe I will once get a chance to focus on this project on 100%, but that time has not yet come, although I tried a lot to present this project in many places on many occasions.

The question is the future of this project. Although there are some space companies and funny “visionaries” all around the world, it looks like these people are spending their time with just a business (money, money, money) and not seriously thinking about how to exist on another planet or Moon on a permanent basis. But remember, once we spend all our resources here on Earth, it isn’t possible to eat the money.

Related articles on this blog:

RESEARCH PAPERS for the project (GNSS for Mars): Continue here