Returning back to Mars

Mars. A planet to which a large number of missions have already been directed as part of technological planetary research but at the same time a planet that has not yet revealed some of its secrets to us. We will fly to her again on July 17 this year.

You could say that in the case of Mars, it is a planet whose world is made up of freezing deserts, with minimal energy resources and even dangerous levels of cosmic radiation on its surface. Nevertheless, this planet fascinates and interests us. What is it? For many, the answer lies in the search for life forms outside of our own planet Earth. For some, Mars may be a futuristic haven where they see the future of at least part of humanity.

Of course, there are many reasons for researching Mars (and other planets). One of the most prosaic is knowing our own past, or answering the questions of “how” and “why” Mars changed from a very Earth-like planet to the one it is today. And this goes hand in hand with the question of the existence of any forms of life on Mars not only in the present but what is perhaps even more important – in its past. Because of the long-term planetary development and from the development of the Solar System itself, our Earth is also changing. Even if we humans contribute to this development (climate) in a certain way through our activities, we will not influence a large part of the changes and it is clear that in the future our planet will definitely change – quite radically. 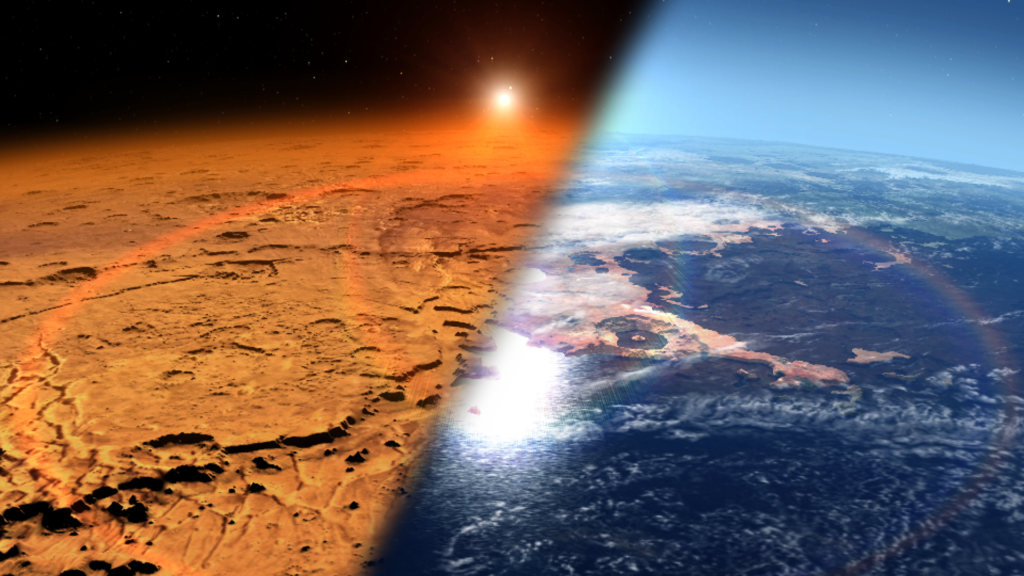 Mars before (right) and now (left). We assume that Mars resembled the Earth as we know it today in the ancient past. (NASA’s Goddard Space Flight Center)

But we will not scare you, from the point of view of an ordinary person, this is a very long time, even if the time horizons of planetary scientists and geologists are perhaps not so long in this regard. And that is why we are also interested in Mars. To know our planetary past and to know perhaps our planetary destiny. We will also find out if life exists on Mars, or if there was life in any form in the past. The study of conditions and the research itself in this direction is not the field of one exact scientific discipline but is multidisciplinary – including natural sciences and technologies.

Of course, the best thing would be to send a group of experts with the necessary equipment to Mars. However, such a solution is still unrealistic with regard to our current technological possibilities. Therefore, it is most advantageous and practical to carry out research on Mars through technological means using robotic missions. Previous missions to Mars – whether orbital missions or surface missions, performing in-situ activities, have provided us with a huge amount of information and data. However, there are still unanswered questions from some areas – confirmation of the existence of life in the past and the development of geological processes.

The findings of the MSL Curiosity mission so far have helped to answer the question of whether Mars was ever similar to Earth, or whether conditions suitable for microbial life could exist on its surface. We now know that it does, but we need to go further and find out if microbial life existed in these conditions in the past. The upcoming Mars 2020 mission should give us an answer to this question. As part of this mission, a new probe will fly to Mars – a rover called “Perseverance”, which at first glance is very similar to its “sister” Curiosity, but has new, more advanced technologies. 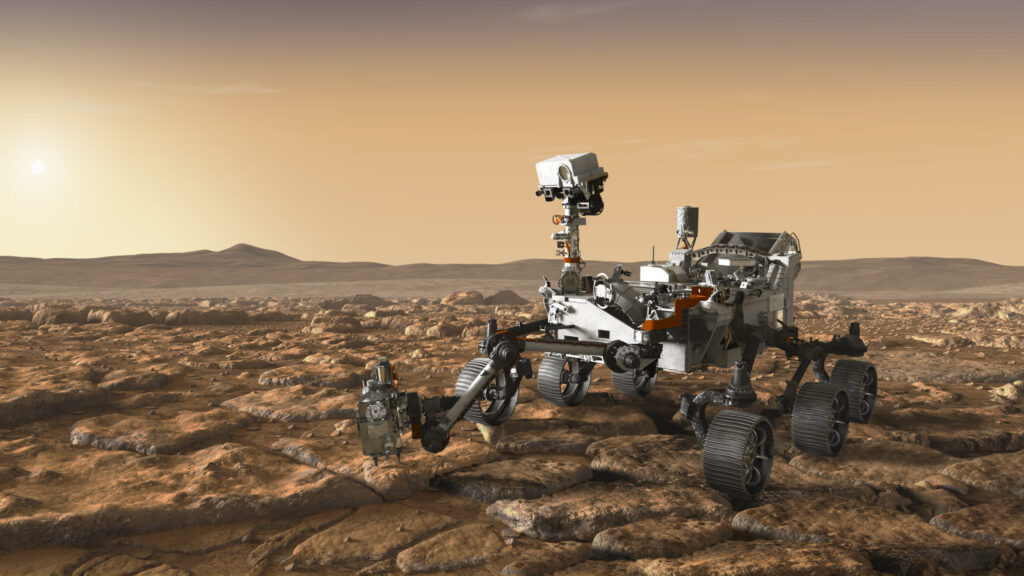 Perseverance on Mars. Visualization before the mission. (NASA/JPL-Caltech)

Rover Perseverance will also have the first flying vehicle on Mars – a propeller-driven drone named “Ingenuity“. The mission itself was announced already in 2012 at the meeting of the American Geophysical Union in San Francisco, as it received the “green” as part of the NASA Mars Exploration program. The launch of the mission itself is planned for July 17, 2020, using the Atlas V541 launch vehicle from Cape Canaveral, Florida, and the landing on Mars in the area of the Jezero crater falls on February 18, 2021. Of course, the exact launch date can still change, the launch window itself is determined in the range from 17.07.2020 to 05.08.2020.

As always, the landing will be followed by the testing of onboard systems, their gradual “revival” from flight hibernation, and the start of a research mission. The mission itself will also be interesting for its landing, which will be the same as the previous MSL Curiosity mission in 2012. Many Mars “settlement” enthusiasts are not aware of the basic planetary facts about Mars and therefore mistakenly believe that it is possible to land on Mars “just “, just like on Earth. This assumption and the very notion are completely wrong.

The atmosphere of Mars, its density and its thickness (height from the surface), is sufficient for landing with “light” probes using parachute braking – although even in this case the limits are very tight. In the case of a heavier probe (or piloted module with a human crew), however, the density of the Martian atmosphere and its height alone (thickness in the profile, or vertical extent) are certainly not enough. At the beginning of the landing, the probe (the entire landing system) will have a cruising speed of 21,240 km/h (5,900 m/s), while the entry into the Martian atmosphere will occur at an altitude of 131 km above the surface (average from the zero reference height of the planet). When landing and breaking with a parachute system, such a distance and the too-thin atmosphere of Mars are simply not enough, and the mission would end in the loss of the probe.

On the other hand, the idea of landing on Mars with a system like the lunar modules used to land on the Moon is also a misconception. The moon does not have an atmosphere that would cause friction and the gravitational force of the moon is many times weaker. When entering the atmosphere of Mars using purely rocket braking, we would simply lose the probe. Braking with a purely reactive system like a rocket engine would be unrealistic for a planetary mission to Mars, and from a purely practical point of view – we would simply need a huge amount of fuel, which would simultaneously increase the weight of the entire lander, resulting in the need for more fuel, etc. Not to mention the fact that we would have to transport this fuel there right along with the probe, which would ultimately make the launch from Earth impossible. 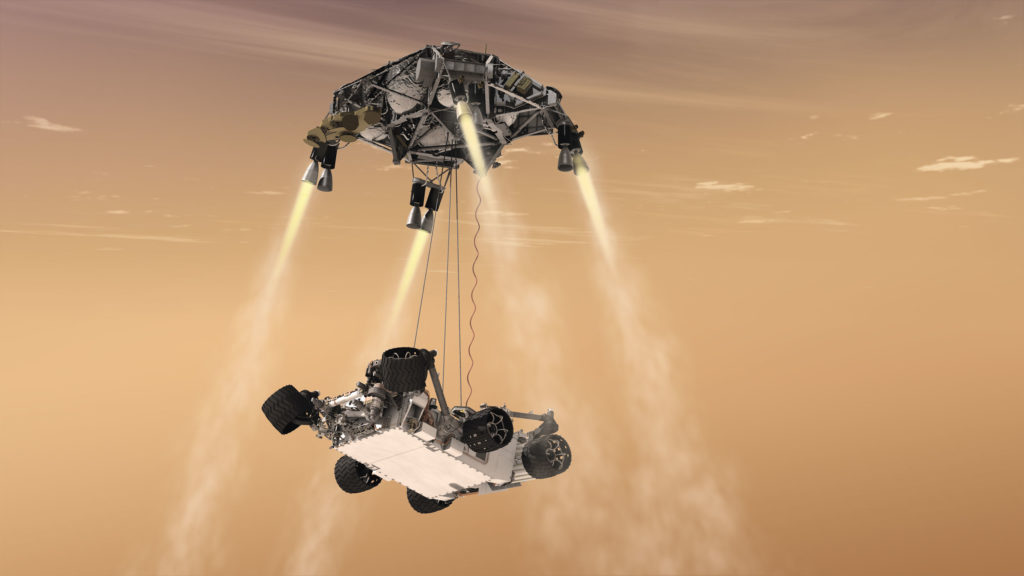 For these reasons, the Mars 2020 mission will use a combined landing method – it will have several stages – entry into the Martian atmosphere, friction braking when passing through the upper layers of the atmosphere, discarding the protective shield, braking with hypersonic parachutes, discarding the parachutes, transitioning to a short free fall and subsequent immediate braking by the reaction system of several smaller rocket engines, the so-called of the “crane system”, lowering the probe itself using special ropes to the surface, detonating the ropes and flying the crane system to a safe distance. This system was tested for the first time during the landing of the Curiosity probe in 2012. The landing system of the Mars 2020 mission has some new elements compared to the version used by the MSL Curiosity mission. It is fully automatic since due to the several tens of minutes of radio transmission between Mars and Earth and back, it is not possible to direct and control the landing from Earth.

The video above – this is how Curiosity landed on Mars in 2012. The same, but the improved system (it will have newly added technologies) will also be used in the Perseverance rover mission (it will land on February 18, 2021). Source: YouTube, NASA/JPL-Caltech.

Joy breaks out at NASA’s JPL Caltech Control Center in Pasadena for exactly one second. But by that time the Perseverance rover will be safely on the surface of Mars. This, too, is one of the proofs of the greatness of even our nearby universe. All that remains is for us to cross our fingers and patiently wait for the work and reliability of the technologies that we humans have created.

The mission itself on the surface of Mars should last at least 1 year (on Mars), or 687 Earth days. However, it is more than likely that the mission will last longer and will bring us many interesting discoveries and new findings.