A regular monthly digest of Mars research news for October 2022.

Can you imagine working almost non-stop? Of course, you’re not a robot with a nuclear power source, so it probably won’t just work like that. In reality, however, life also pulsates on the fourth planet, Mars. Although so far we only know about one type of extraterrestrial “life” – the robotic one. 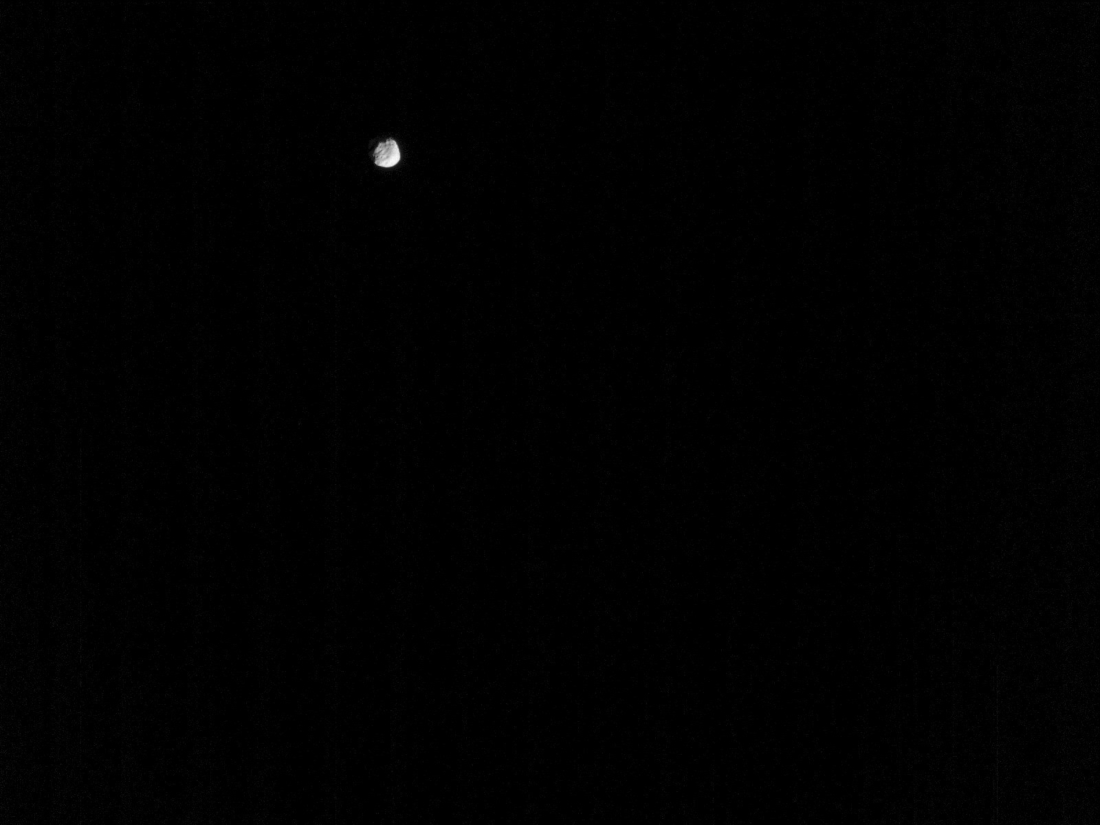 One minute before midnight, you are standing in the Jezero Crater on Mars. In the light of the stars and the two small moons of Mars, Phobos, and Deimos, you can easily make out the shape of the looming delta. Nothing moves; the wind is too light tonight to blow even a grain of sand. Everything is calm and quiet. Then, a strange, mechanical buzzing sound is heard out of nowhere. Subsequently, a robotic head rises from the darkness, its five eyes glinting menacingly in the soft light of an otherwise completely dark and freezing night. No, this is not a monster or an alien. So, if we were to argue about it, in reality, it is already an alien, even if created by humans on Earth. The Perseverance probe has just been activated for its night-time activities, which mainly consist of monitoring the surroundings at night using a weather station, scanning the surroundings and the sky, but also recording sounds in three-minute sequences. 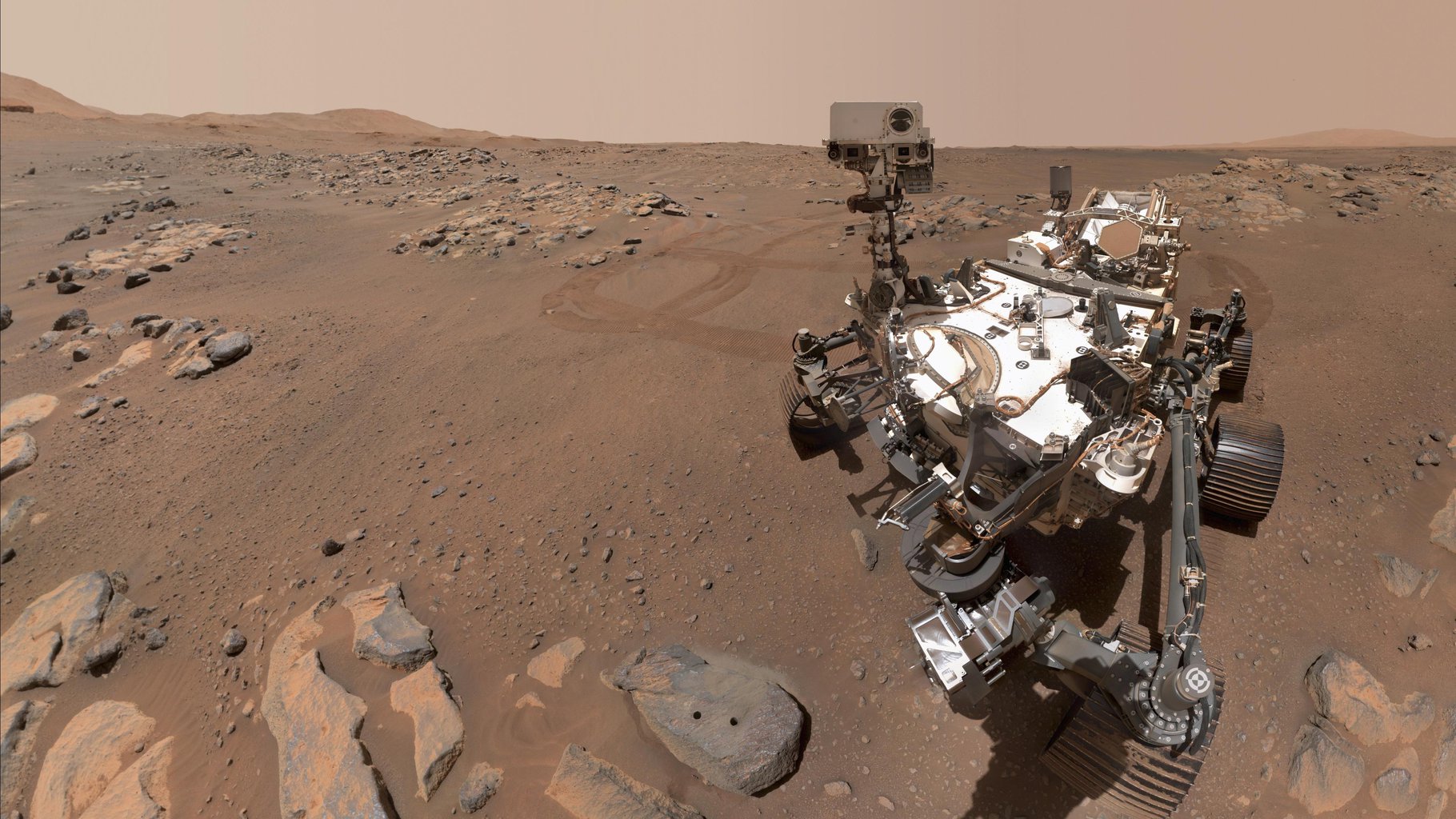 Rover Perseverance on Mars. This image was created by processing multiple photos taken by the Perseverance’s arm (so the arm is basically invisible). Image credit: NASA/JPL-Caltech

Where are Perseverance and her helicopter Ingenuity currently located?

On the interactive map below, you can see where Perseverance and Ingenuity are right now:

An interesting type of terrain, which was already observed on Mars in 2000 by the Mars Global Surveyor orbiter, was re-observed by the camera of the HiRISE experiment on board the active Mars Reconnaissance Orbiter (MRO, NASA). These zigzag dust slopes on Mars are probably formed by the gradual loosening of the upper layers of regolith (soil on Mars). 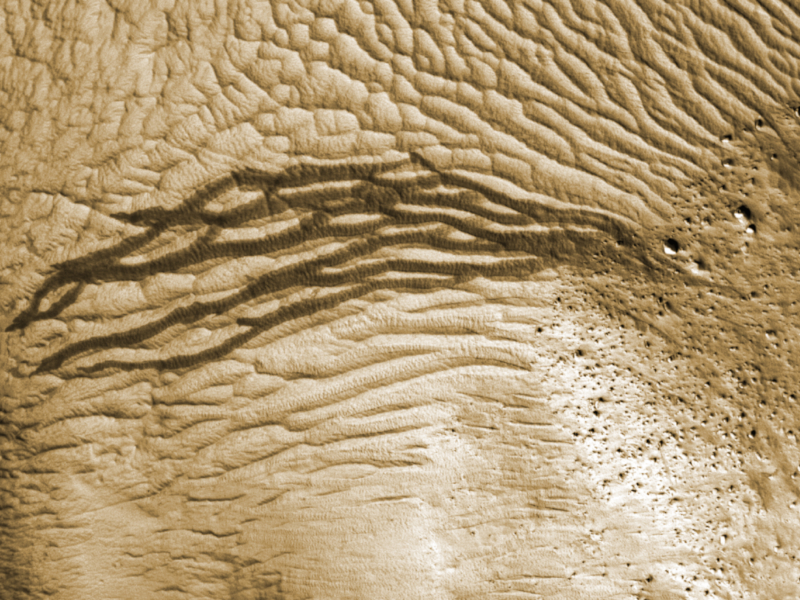 Meandering slopes on Mars. Artificial coloring is used to highlight details. The original image will open after clicking on the image. Image credit: NASA/JPL-Caltech/UArizona; Processing: J.Kozar

The trigger for this release can be an impact (for example, a meteorite), but also atmospheric influences, such as wind vortices (also referred to as “Dust Devils”). I will remind you that the wind on Mars can increase in intensity, but its strength is far from what it would be in the conditions on Earth. The atmospheric pressure on the surface of Mars is less than 1% of the atmospheric pressure on the surface of the Earth, and the density of the Martian atmosphere near the surface is the same as the density of the Earth’s atmosphere at an altitude of 35 km from the surface (≈0.020 kg/m3).

An interesting image from the archive: how the wind blows on Mars

No, the following picture was not taken in an aquarium, and it also does not show a plethora of sea creatures on the bottom of the sea. I’m sure you’ll agree with me that the shapes in this photo are not weird but in a certain way very nice. Nature simply has talent, whether on Earth, Mars, or anywhere in space. 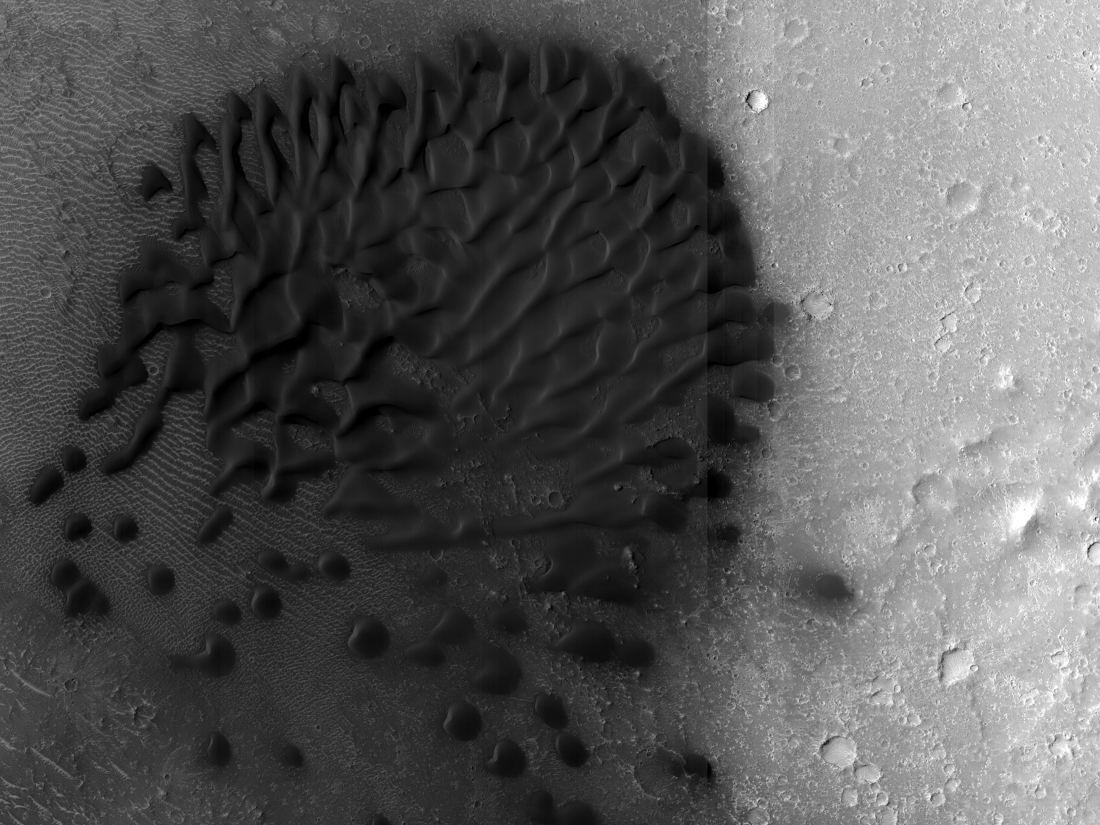 The reason for this interesting picture was the analysis of the direction of wind-blowing – air flow in the Cerberus Fossae region (Elysium Planitia area) in the vicinity of the impact crater. The original image was taken back in 2008, and the image you see in this post is from November 14, 2021 (using the Mars Reconnaissance Orbiter/NASA probe, from an altitude of 276 km). The sand dunes that can be seen in the picture were formed over a very long time, within the range of several Martian years (1 year on Mars is 686 days on Earth).

A dust storm on Mars recedes

Once again we got really windy on Mars, although this time it wasn’t global on the whole planet, the attention was sharpened mainly because of any potential risks. Because the question is simple, “can you predict the weather?“. Probably difficult, even though we have many meteorological models available (in the case of terrestrial conditions). Back when I was working in Kosice, Slovakia (EU), my meteorology teacher Mr. Jan Kutny used to say that “the weather is an instantaneous and random state of the physics of the atmosphere and therefore it is almost impossible to predict it”. I very much appreciate what I learned from Mr. Kutny at that time and I completely agree with his opinion. Many would like to have a professional discussion on this topic, but the fact is that even the weather on Mars is not that predictable. And this is despite the fact that we currently have quite an interesting array of space probes with cutting-edge scientific equipment at our disposal on this planet. 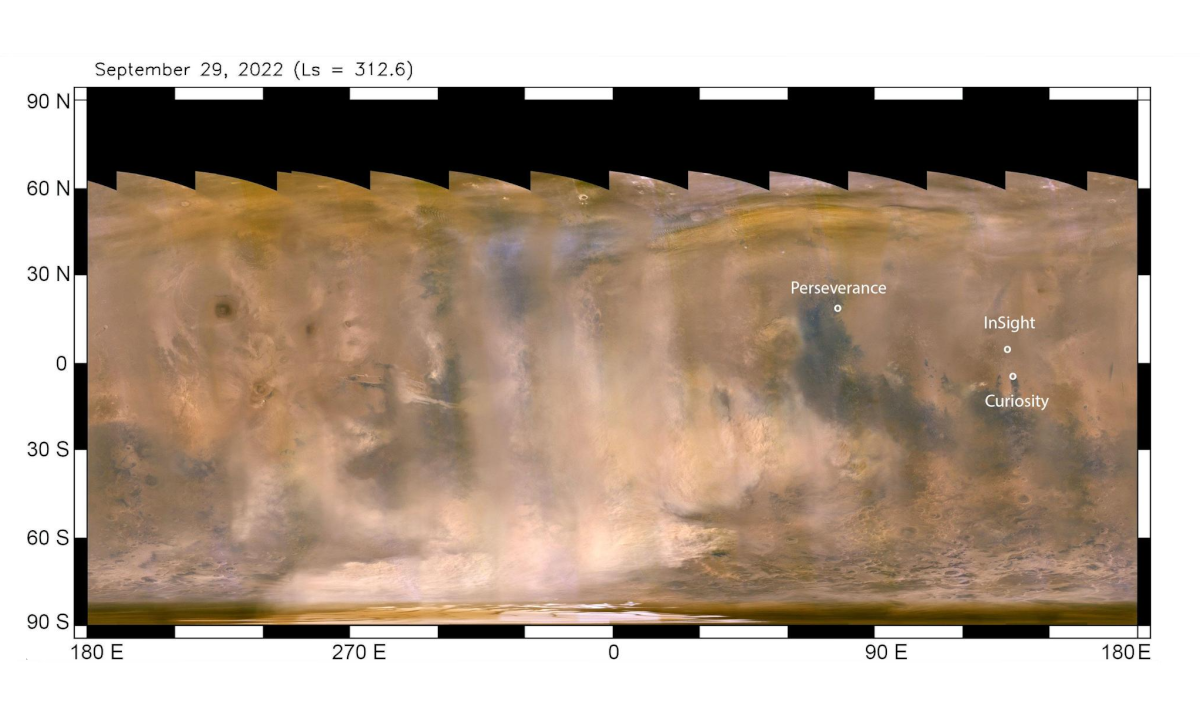 The beige-colored clouds in this map of Mars taken from MRO are essentially dust storm observed from September 21 to September 29, 2022. The clouds are about the size of Earth’s continents. The images were obtained using the MARCI camera on board the Mars Reconnaissance Orbiter (MRO). Image credit: NASA/JPL-Caltech.

The dust storm, the development of which was observed on Mars by the Mars Reconnaissance Orbiter (MRO, NASA) in September, is slowly dying down. The distance of the dust storm from the surface mobile probes (rovers) Curiosity, Perseverance, and the static probe InSight was almost 3500 km. The individual probes are highlighted in white on the map: Curiosity (600 km from the InSight probe) and Perseverance (3455 km from InSight).

Although the distance from the probes is considerable at first glance, the particles that reached the upper layers of the atmosphere were able to cause a significant reduction in the energy obtained by the solar panels of the InSight probe. The probes Curiosity and Perseverance do not obtain energy from solar cells, but from a nuclear onboard source (radioisotope thermoelectric generator).

The storm is slowly dying down and will not affect the further course of research missions on the surface. In the case of the InSight probe, the so-called “bonus part of the mission” is because the planned basic mission of this probe was previously completed. However, InSight continues to work and provides other interesting data from measurements of “earthquakes” on Mars (so-called “Marsquakes”).

SHIELD – A new way to land on Mars?

Are the currently used methods of landing on the surface of Mars enough for us, or do we need something else? And what about simply bumping into Mars like this… that is, into its surface. No, nobody’s gone crazy, and it’s not science fiction either. 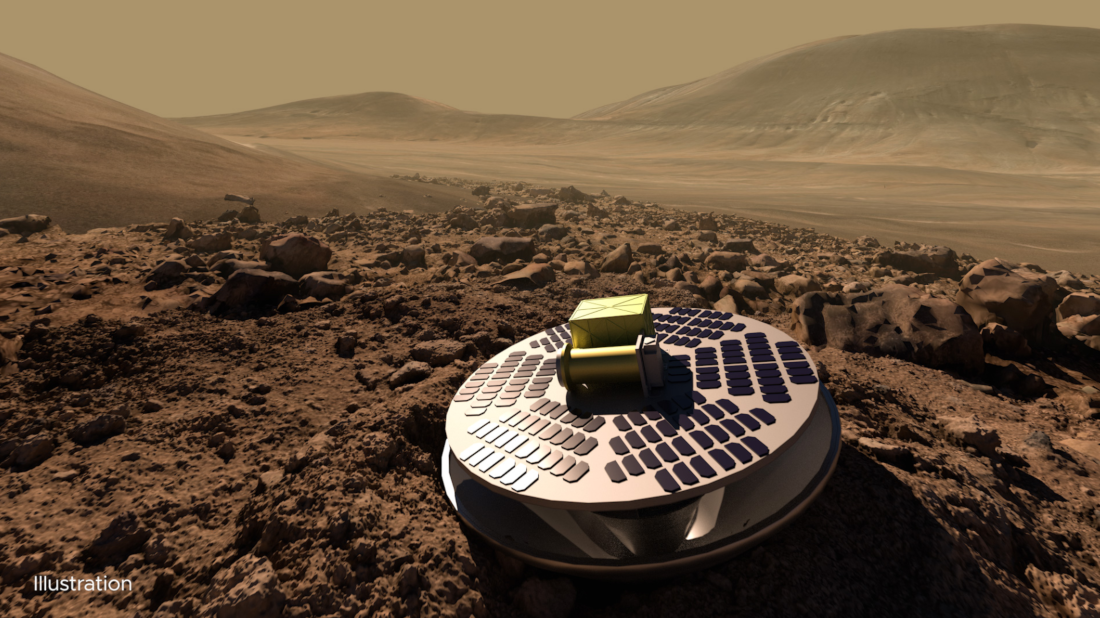 NASA has successfully landed on the planet Mars 9 times to date. All landings were characterized by one common factor, which was the risk of damage to the expensive probe. That is why the landings were so-called “soft”, some of them using complicated landing airbags, some using reaction braking by retro-rockets, or a complicated method of landing using the so-called “sky crane” with reaction braking elements of a certain part of the probe’s landing apparatus.

Research is currently underway on additional technology that will allow NASA to land, especially in difficult and inaccessible areas. Of course, in these areas and using this technology, the expensive planetary rovers and probes with too expensive and complicated scientific equipment will not use this technique to land. The reason is simple – the landing will take place with a simple impact, or by hitting a predetermined spot on the surface.

In this way, it will be possible to place the probe even in very inaccessible and risky areas, and the subsequent planetary research of these areas will complete the mosaic of knowledge about the planet Mars that we still lack.

You can see the “crash” landing method in the video below:

During its journey this summer, the Curiosity rover arrived through the narrow, sand-lined “Paraitepuy Pass” in a location with the occurrence of sulfates and salty minerals. This site is located in the Mount Sharp area.

A scientific hypothesis assumes that, over billions of years, the water drying up in this place left behind rich deposits of minerals. If this hypothesis is correct, then these minerals will make it possible to find out how and why the climate of Mars changed to the current one. Before that, according to all the information and research results found so far, Mars looked the same as Earth. At present, however, its surface is more or less a frozen desert.

The Chinese rover Zhurong has an onboard radar that can detect subsurface deposits to a depth of approx. 100m. 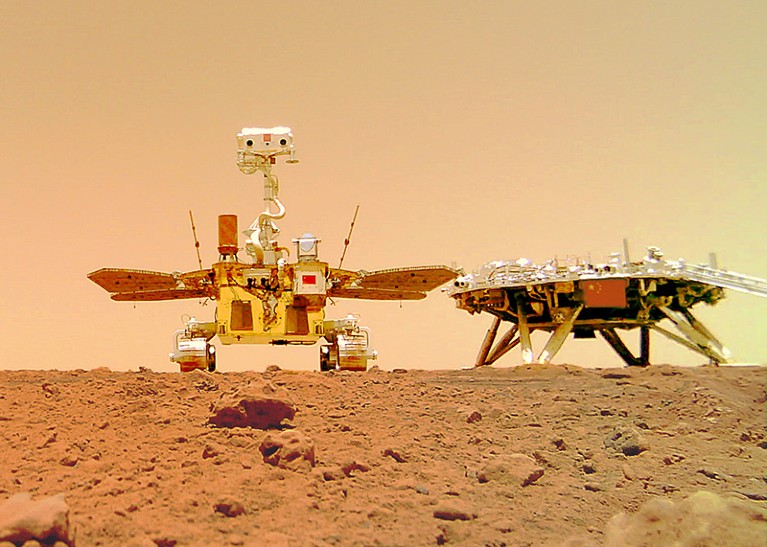 Zhurong peered deep beneath the Martian surface and found evidence of two major floods that likely shaped the area (Utopia Planitia) the rover has been exploring since landing in May 2021.

One of the reasons why he is focusing on this location is the fact that radar images have already indicated the presence of frozen water ice under the surface in the past. Although it has not been confirmed whether it is really ice or the remains of lava fields. New findings, however, indicate that the place was once completely flooded with water, or by the ocean, which disappeared from the site a long time ago. 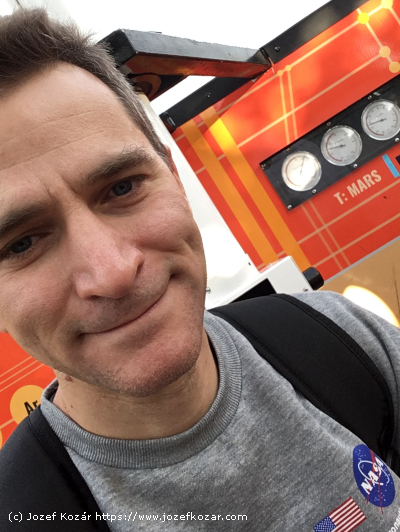 Another issue of the monthly report “Mars Exploration Digest” and its Slovak version “Výber z výskumu Marsu”, you will be able to find on my pages www.jozefkozar.com/lab at the end of November and beginning of December 2022. Folks, I wish you all a relaxing month.

This article you can find also in the Slovak newspaper SME (in Slovak language).