Christmas Mars in the evening sky

The Christmas star is an integral part of Christmas. Many of us even have it on our tree. However, this year’s star will not be quite a “star”.

Mars will come closest to Earth already on December 1, 2022 (03:18 at night, CET), but the opposition to the Sun will not occur until December 8, 2O22. At first glance, Mars itself is very similar to our planet Earth. Of course, if we go deeper, we will come across many differences and find out that it is a completely different world from what we know on our home planet.

What does it actually mean when a planet is in opposition?

The opposition itself means that Mars is exactly opposite the Sun in the sky, but in space itself, however, Mars is on the same side of the Sun as Earth. However, the word “closest” should of course be taken with a grain of salt, because the planets move around the Sun in elliptical orbits, meaning that their mutual approach is never the same. We experienced one of the closest “approaches” of the planet Mars to Earth, for example, in 2003. At that time, Mars was 56 million kilometers away from Earth. This year’s “Christmas” December opposition of Mars will mean approaching the Earth to a distance of approximately 81.5 million kilometers (81,450,876 km exactly).

So how will Mars be visible?

For people living in the city, or in other places with a lot of light pollution in the night sky, Mars will look strikingly like a very bright “star”. Of course, if you go outside the city, where there is not so much disturbing light, or if you are somewhere in the mountains with very good conditions (simply put – “where it is as dark as possible”), you will see Mars as one of the dominants of the night sky – as really a very bright “star” of orange color. Mars itself will reach a brightness of -1.9 mag in the night sky and will be visible high above the horizon. The conditions for observing Mars itself will be very good during the coming weeks, so you don’t have to worry about possible bad weather and cloudy skies during the first few days in opposition.

As I wrote above, Mars will look like a very bright orange “star” to the naked eye. However, if you have a telescope at your disposal, or you can go to the nearest observatory in the area, definitely give it a try. In this case, on Mars, you will be able to clearly recognize distinct polar caps and various darker features on the surface of the planet. 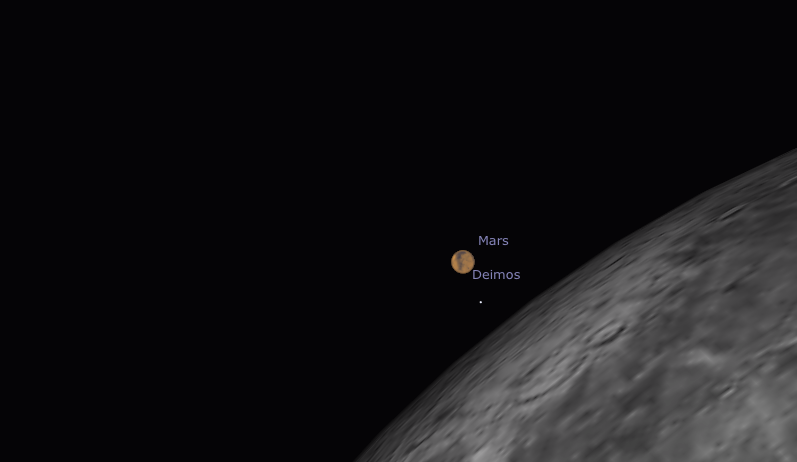 View of Mars through a small telescope. Simulation source: https://www.jozefkozar.com/lab

The opposition itself reaches its maximum on the morning of December 8 at 06:36 (CET; calculation for Brno, CZ). On this occasion, however, Mars also prepared a big surprise for us. Coincidentally, our closest planetary neighbor – the Moon – will also appear in the same places in the sky. 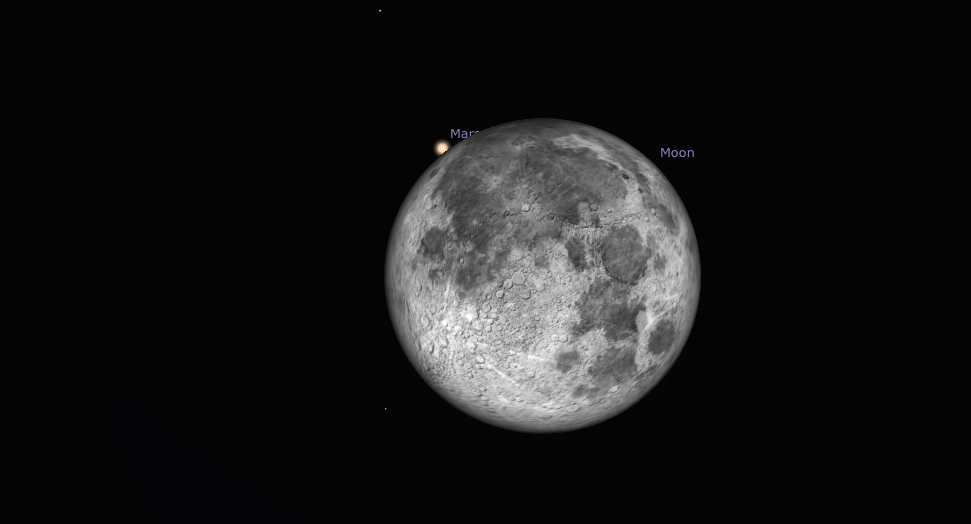 View of Mars with the naked eye – the beginning of the eclipse of Mars by the Moon. Simulation source: https://www.jozefkozar.com/lab

Optically, it will cause the planet Mars to be covered by it for a while – an interesting phenomenon will occur for the terrestrial observer – the covering of the planet Mars by our Moon. Behind the edge of the Moon, the planet Mars will completely disappear at exactly 06:04 (CET; calculation for Brno, CZ) and will “peek out” from behind the Moon again at 06:58 (CET; calculation for Brno, CZ). Of course, it is necessary to take into account the location of the observer – if you are in Bratislava, Banská Bystrica, or Košice, these times may differ with a minute delay.

View of Mars with the naked eye – the end of the eclipse of Mars by the Moon. Simulation source: https://www.jozefkozar.com/lab

So, if you have some time in the evening in December, be sure to look at the evening or night sky. It will be worth it. However, if you plan to observe the eclipse of the planet Mars by the moon, don’t forget to dress properly, I assume it will be cold 🙂

You can also find this article in the Slovak newspaper SME.